The Last Battle of Winchester – The Charge of Colonel James Schoonmaker in his Own Words. 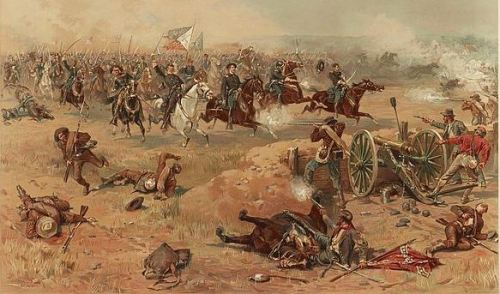 At the battle of Opequan Creek between Sheridan and Early, September 19th 1864, I commanded the First Brigade of Averills Cavalry Division. We had moved up from Martinsburg, joining the Second Brigade of our division at Bunker Hill, striking the detachment of Early’s command that had driven us out of Martinsburg the day before and forcing it back on the extreme left of Early’s line of battle. When Sheridan massed his cavalry for the memorable charge my brigade was honored with the right of the line and meeting with less resistance in the charge than the commands in the center and left, when we finally halted, we were considerably in advance of them and directly under fire of the confederate infantry we had forced back into the trenches and earthworks in front of old Fort Milroy, commanding the Moorfield Pike. The position was very exposed and immediate action was necessary. To withdraw was to lose our position, and to remain idle under destructive infantry fire was worse. Quickly as possible I detached my old regiment, the 14th Penn’s Cavalry by way of Moorfield Pike to the west side of the entrenchments, and with balance of brigade on north side I charged both lines, mounted, up the hill over both lines of rifle pits and over earthworks, capturing a large number of the enemy and completely destroying the left defense of his line of battle. We dared not push further, as we were considerably south of Early’s main line, so taking our headquarters flag I waved our possession of earthworks to Custer and Merritt, in valley below, who immediately made their magnificent charge, the Sixth Corps on the left taking up the movement, and in half an hour afterward Sheridan had Early “whirling up the valley”. Sheridan thanked me for our gallantry and prompt action after the battle, but the unfortunate conduct of General Averill at Fishers Hill three days afterward, lost his command the recognition I know was the intention of the General commanding.

I beg to refer to the map accompanying the account of the engagement in the second volume of General Sheridan’s Memoirs. Our last position on right of Martinsburg Pike is the point from which we charged the earthworks shown on hill in our front.

I have the honor General to be,

This letter was found through the research of Nick Picerno, Chairman of the Shenandoah Valley Battlefield Foundation at the National Archives and transcribed by the Dean of the 14th Pennsylvania Cavalry, Duncan Campbell of Charllottesville, Virginia.