A Misrepresentation: Sheridan’s Reaction to Painting of Himself Riding the Battle Line At Cedar Creek 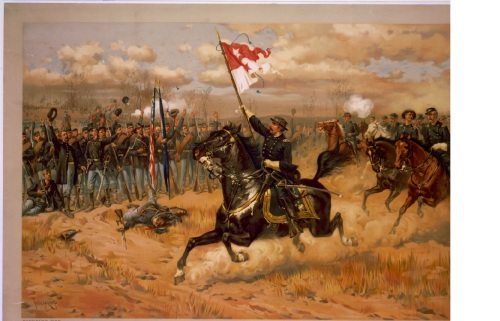 When Sheridan saw this now widely publicized painting of himself riding along the line of battle to inspire the men at Cedar Creek and show that he had returned to the army, he reacted vociferously to its inaccuracies.

“Now just look,” said Sheridan, “and see how blank ridiculous that man has made me appear. Here I am represented as riding down the line with a flag in my hand and a whole regiment of cavalry as my escort. Why, blank, blank, blank, I made to appear like a blank fool. Now the truth is I rode down the line with ‘Tony’ Forsyth; that was all there was to it. No flag. No escort.”

Soon after, Sheridan read an article describing his reaction to the artwork. His response:  “I wouldn’t have cared so much about it except that [it] makes me swear so [much]. People will think I am in the habit of swearing. Why, blank, blank, blank, you that isn’t so.”

Note that “Tony Forsyth” was Col. James Forsyth Sheridan’s Chief-of-Staff. The ride along the battle line had been the brainchild of another staff officer, Major George “Sandy” Forsyth (no relation to James)  had been the one who suggested that Sheridan show himself to the men when he returned to the Army at Cedar Creek.

Sheridan’s appearance along the line of battle rejuvenated the rank and file of the Army of the Shenandoah. Lt. Col. Moses Granger of the 122nd Ohio, Sixth Army Corps recalled the scene:

General Sheridan came riding along the line, just in my rear, as I was sitting on a stump, he drew rein, returned our salutes, gave a quick look at the me, and said, ‘You look all right, boys! We’ll whip’em like h–l before night.’ At this hearty cheers broke out, and he rode on passing from the rear to the front of our line through the right-wing of my regiment, and thence westward followed ever by cheers.”

Instantly all thought of merely defeating an attack upon us ended. In its stead was a conviction that we were to attack and defeat them that very afternoon. All were sure that “Little Phil” would make it impossible for the enemy to turn our flank, and easy for us to turn theirs.”

The 10th Vermont Infantry at the Battle of Cedar Creek

The Battle of Cedar Creek: Maj. D. A. Grimsley, 6th Virginia Cavalry, Col. William Payne’s Brigade (Note click on article, it will go to a new page and then use the magnifying tool to increase font) 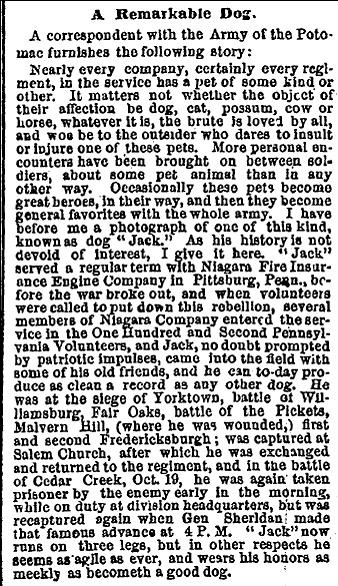 I have read with interest in your issue of December 29, a sketches from Serg’t George W. Toms, 5th N. Y. Cav, in regard to the battle of Cedar Creek. I have also read in your valuable paper communications from many different pens in regard to that battle, and think that Serg’t Toms gives a very correct account of the affair.

My regiment, the 15th W. Va. Belonged to the Eighth Corps as did all of the West Virginia infantry, except the 7th and 5th, and there may have been one other. We were attacked about 3 o’clock a.m., Oct. 19, 1864, long before daylight. The morning was aas dark as it could well be. There was a New York regiment [5th, Heavy Artillery] in our front on picket, and in some way the enemy got the countersign and relieved all the pickets on our front. As we were on the extreme left, the enemy got into our camp while we were all in our shelter-tents asleep. When the alarm was given and our boys began to show fight, the rebels that were inside our fortifications shouted out not to shoot-that they were our own men; but there was several volleys fired, although the only light we had to show us they were rebels was by the flash of our guns, which disclosed the fact that our camp was full of them.

They would have easily captured nearly all of the Eighth Corps, if it had not been that they went to pilfering our camp. We retreated back down the valley until we formed when Gen. Sheridan came up…

Maj. Gen. William H. Emory, “Old Brick Top,” as he was known in the Regular Army or more simply the “Old Man” to the young soldiers who served under him, is generally viewed as the weak link in the command structure of Gen. Phil Sheridan’s Army of the Shenandoah. He was certainly an outsider; General Horatio Wright commanded the Sixth Corps from the Army of the Potomac and had fought through Grant’s bloody Overland Campaign. General George Crook was Sheridan’s West Point roommate and a fellow Ohioan. Sheridan’s chief of cavalry, Gen. Alfred T. A. Torbert had served his commander as a division commander since May of 1864. All three of these men had, to one degree or another, already established a relationship with Sheridan, their commander. At fifty three years of age, Emory was also significantly older than the other officers, including Sheridan who was only 32. Emory developed a reputation as a worrier throughout the war. During the Port Hudson, Louisiana Campaign of 1863, staff officer David Hunter Strother believed that Emory’s timid councils were having a negative impact on Union commander Nathaniel Banks. When the fighting at the Third Battle of Winchester or Opequon Creek, temporarily went against the Union, Emory believed that all was lost, but in the end the Union forces achieved victory.

One month later at Cedar Creek while Sheridan was away at Washington, however, Emory prophetically warned Wright and Crook that the army’s left flank was vulnerable to attack. However, the two men whose commands emerged from Third Winchester and Fisher’s Hill with significantly enhanced reputations, “pooh-poohed” Emory’s warnings. Jubal Early struck precisely where Emory had warned. Perhaps Emory had worried one time too many, and Crook and Wright saw his forebodings at Cedar Creek as a case of the boy or cried wolf. In fairness to Emory, however, military officers earn their paychecks considering all of the possibilities and taking action to prevent failure and ensure success. That is exactly what Emory did at Cedar Creek, but he was an outsider and not a member of Sheridan’s inner circle nor was he from the Army of the Potomac. Although, his forewarning only earned him the enmity of Wright and Crook, Emory had done his job. Had Wright and Crook listened to Emory, the need for Sheridan’s famous ride may have very well been eliminated.

The Battle of Cedar Creek as seen by Col. Rutherford B. Hayes 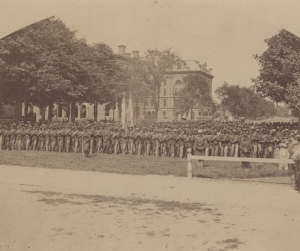 Hayes' 23rd Ohio Infantry in 1865 at Muster Out in Cleveland

Colonel Rutherford B. Hayes of the 23rd Ohio Infantry went on to become President of the United States. For all of his political success, he treasured the time that he spent leading his men during the Civil War more than any other achievement in his life. Below is his brief diary account regarding the battle of Cedar Creek.

Wednesday, October 19. — Before daylight under cover of a heavy fog Rebels attacked the left. Colonel Thoburn’s First Division was overwhelmed. His adjutant, Lieutenant —brought me the word. We hurried up, loaded our baggage, and got into line. [The] Nineteenth Corps went into the woods on right (one brigade). General Sheridan was absent. General Wright, in command, directed my division to close up on [the] Nineteenth. Too late; the fugitives of the First Division and the Nineteenth’s brigade came back on us. The Rebels broke on us in the fog and the whole line broke back. The Rebels did not push with energy. We held squads of men up to the fight all along. My horse was killed instantly. I took Lieutenant Henry’s, of my staff. We fell back–the whole army–in a good deal of confusion but without panic. Artillery (twenty-fivepieces) fell into Rebel hands and much camp equipage.

About two and one-half miles back, we formed a line. [The] Rebels failed to push on fast enough. P. M. General Sheridan appeared; greeted with cheering all along the line. His enthusiasm, magnetic and contagious. He brought up stragglers. “We’ll whip ’em yet like hell.” he says. General Crook’s men on left of pike. — Line goes ahead. A fine view of the battle. [The] rebels fight poorly. Awfully whipped.

-Cannon and spoils now on our side. Glorious!

In 1864, General George W. Getty received command of the Second Division, VI Army Corps, Army of the Potomac. Prior to that he had served as an artillery commander, infantry division commander in the Antietam and Suffolk Campaigns and a military engineer. He had quietly carried out his assigned duties to the best of his ability, which was quite considerable. Getty had developed a reputation for dependability seldom matched in the often quarrelsome Army of the Potomac. “He is a cool man,” declared Theodore Lyman of General George Meade’s staff . “Quite a wonder,” he added. Getty considered himself to be a soldier whose duty it was to obey orders. ” I always obey an order. If I was ordered to march my division across the Atlantic Ocean, I’d do it. At least I would march them up to their necks in the sea, and then withdraw and report that it was impractical to carry out the order.”

Getty exhibited his leadership ability on May 5, 1864 at the battle of the Wilderness. When ordered to a vital crossroads at Parker’s Store, Getty raced ahead of his division with his staff and arrived at the intersection just ahead of A. P. Hill’s Corps. With only his staff and orderlies, Getty held the position until his combat troops arrived. Getty would lead his troops and others assigned to him in the Wilderness fighting until he went down wounded. He returned to command in time to assist with the fighting at Fort Stevens, during Confederate General Jubal Early’s Raid on Washington. With the Sixth Corps, Getty would spend the balance of the active campaigning that year in the Shenandoah Valley.

Getty was often called upon anytime there was a tight situation at hand. His division bore the brunt of the fighting in an all day, high intensity skirmish at Charlestown on August 21 and anchored Sheridan’s left flank at the battle of Opequon Creek (Third Winchester). When the Confederates smashed in the VI Corps right wing during Sheridan’s initial attack, it was Getty who brought up the New Jersey Brigade from reserve and threw them into the thickest of the fight to staunch the bleeding and turned artillery against the attacking Confederates.

However, it was at the battle of Cedar Creek on October 19, that Getty rose to the apex of his duties in the Valley. With Jubal Early’s legions sweeping Sheridan’s army back in confusion, Getty, who had rose to Corps command due to Sheridan’s absence and casualties,  posted his division on Middletown’s Cemetery Hill, becoming the sole bulwark of Union resistance. Elements of three Confederate divisions attacked, but Getty’s men held the position. Confederate artillery attempted to hammer them off the hill but Getty did not pull back until the Southern infantry had bypassed his right flank in their pursuit of the balance of the Sixth Corps. When Sheridan arrived on the battlefield that morning, Getty’s was the only organized infantry division from the entire army that was on the front line confronting the Confederates with the Union cavalry. After the battle, Sheridan wrote Grant, “General, I want Getty of the Sixth Corps and the brave boys, Merritt and Custer, promoted by brevet. Getty would go on to serve the Union cause well on April 2, 1865, when his division spearheaded the Union breakthrough at Petersburg but his service at Cedar Creek was perhaps his greatest contribution to the Union war effort. Had it not been for Getty, there is no telling how the Battle of Cedar Creek would have played out and what impact its loss would have had on Abraham Lincoln’s reelection.